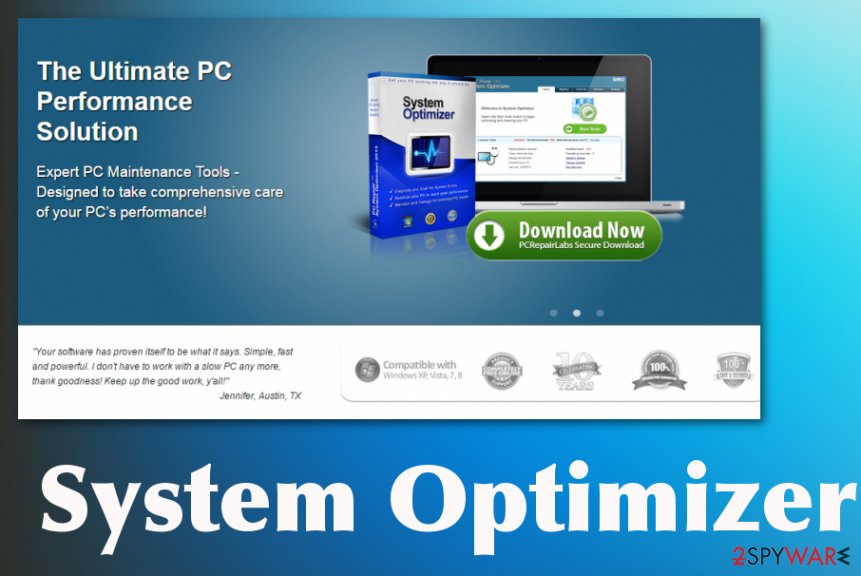 System Optimizer is the potentially unwanted program that supposedly offers disk optimization and registry cleaning features, but there is no particular reason to keep the PUP on the machine. It gets promoted on various platforms with advertisements claiming that tool updates drivers, delete temp files, and reports system errors. However, the said cleaning functions are not real, and, in most cases, clearing registry entries and so on can affect the performance even more than the cyber infection initially did.

This PUP can get called a System Optimizer virus by users that get affected by the shady tool because it appears out of nowhere and triggers unwanted processes, questionable scans, or delivers results not related to the machine affected. All the functionalities should apply for Windows devices mainly, but there are a few distributors, deceptive sites that push the mobile version of this program. It is possible, that adware-related application is distributed on various operating systems and can frustrate people all over the globe, so be cautious when you receive any suspicious malware alerts or scan results from a tool that you haven’t installed yourself.

System Optimizer focuses on showing exaggerated results of the system scan with various claims about system errors or even malware infections. However, the free version of the application has no functionalities that could help with the detected problems, so you get suggested to install a full version of the tool or pay for the licensed version that potentially is also useless.

System Optimizer can also be categorized as adware because the computer starts showing ads and redirects when it gets installed or finds its own way on the targeted machine. If you noticed additional pop-up ads, promotional material, banners, or redirects to questionable advertising services, take actions ASAP to avoid serious infiltrations of malware and damage to your system.

System Optimizer is a questionable program, which claims that it is capable of increasing PC’s speed and improving its functionality. Unfortunately, but we can’t guarantee that after eliminating all bad registries and suspicious files that will be found by this program you will improve your PC’s speed.

That’s because you have to get rid of thousands of bad registries in order to see a clear improvement in your PC’s work. Also, you can definitely do that for free with the help of reputable and well-known software, so why should you install and then purchase this suspicious application. You better get Reimage Reimage Cleaner or a similar cleaner instead of the rogue System Optimizer for such system issues or even virus damage termination.

System Optimizer is the tool that claims to have various features useful for the user, but this is not valuable at all.

System Optimizer is the tool that claims to have various features useful for the user, but this is not valuable at all.

As we have noticed, this program is mostly used for making the money, which means that it seeks the only thing – trick you into buying its license. Beware that most System Optimizer scam results and alerts can be exaggerated and may have nothing in common with the real situation of your computer.

Experts[3] note that you shouldn’t believe anything that appears on the screen out of nowhere, especially such alerts or malware warnings. In most cases, System Optimizer removal is the only cleaning process that you need to perform because all the claims on the pre-determined list are fake and not related to your machine.

In addition, it should be known that this application may infiltrate your computer in a bundle with other programs and then start showing you its questionable alerts without a break. How can you avoid System Optimizer infiltration? The easiest way to do that – start monitoring the installation of every freeware because there are thousands of free programs that have been involved in the distribution of additional components.

To sum up, System Optimizer is a very questionable application, which should be used with extreme carefulness. If you know that you have never downloaded this program to your computer, you should get rid of it. The easiest way to do that is to download a reputable anti-malware tool that can detect various cyber intruders and clean them off of your device.

Such security programs should also help you to detect hidden components of the shady tool and avoid reappearance of this questionable program. So remove System Optimizer as soon as you can and make sure to choose the proper anti-malware program to have the one-time experience of terminating the PUP and forget about all those frustrating symptoms.

System Optimizer PUP is the program that gets promoted online and pushed as a real system tool that supposedly improves the performance of mobile devices too. 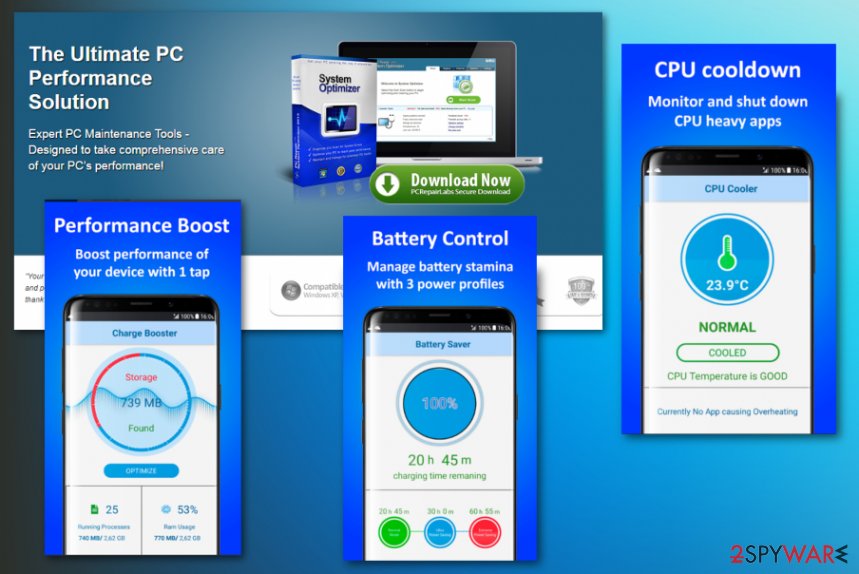 System Optimizer PUP is the program that gets promoted online and pushed as a real system tool that supposedly improves the performance of mobile devices too.

Ways how PUPs get distributed around

These tools can be installed by the users themselves because when PUP is actively it is promoted, you can easily fall for those useful claims and allegations. However, you should avoid its official website and other sites that have been involved in its distribution and promotional campaigns.

Basically, the first step that you should do is to read the end user’s license agreement, privacy policy, and similar information. In addition, make sure you select the Custom or Advanced installation option and then follow every installation step of the freeware. Once you see a warning about optional components, you should uncheck each of them because they may lead you to the infiltration of a virus.

If the System Optimizer virus has already shown up on your computer, you should get rid of it. You can do that with the help of anti-malware programs designed to scan the machine fully and indicate any risks regarding the performance, speed, or even malware infections. You may benefit from some tips listed below.

You may also try to go for the manual System Optimizer removal process by resetting all web browsers on the machine to default. This is how all of the changes made by this intruder gets reversed and additionally installed extensions or tools deleted.

However, the best way to remove System Optimizer from your device is the anti-malware software that is based on detecting malicious activities and possibly dangerous programs. AV engines can find parts of the shady software in various places of the system and even the ones that are hidden in the background, so your device gets properly cleaned.

You may remove virus damage with a help of Reimage Reimage Cleaner . SpyHunter 5Combo Cleaner and Malwarebytes are recommended to detect potentially unwanted programs and viruses with all their files and registry entries that are related to them.